Robert Parker comment for Coudoulet de Beaucastel 2016: "potentialy the best Coudoulet I've ever tasted." Certainly 2016 is one of the greatest red wine vintages of the last decades in the southern Rhône and forms together with 2015 a fantastic pair of twins with different stylistics. 2016 is considered the vintage with an outstanding power, 2015 as the elegant style.

Coudoulet's 30 hectares of vineyards are located east of the Châteauneuf-du-Pape vineyards, just outside the AOP area, although the soils are very similar to those of the Châteauneuf. Grenache, Mourvedre, Syrah and Cinsault are separately hand-picked and fermented. This is followed by the assemblage of grapes and a six-month ageing in large wooden barrels.
The 2016 Coudoulet de Beaucastel smells of dark berries, herbs, violets and raspberries. It is enormously punchy on the palate thanks to the very old vines, juicy, long and complex, for a Côtes-du-Rhône it has a sensational depth, as it is usually found only with its neighbor Chateauneuf-du-Pape. Should develop well over 15 years and become one of the longest lasting Coudoulets of all time. 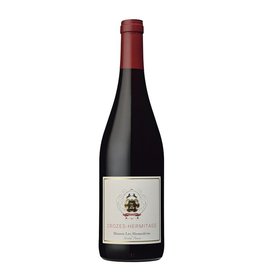 meaty and soft
2015 Châteauneuf-du-Pape, Domaine du Vieux Lazaret
€22,49* €29,99 / Liter*
* Incl. tax Excl. Shipping costs
By using our website, you agree to the usage of cookies to help us make this website better. Hide this message More on cookies »